If you are looking at this webpage having just seen a strange sight on a spring evening in some corner or other of our country, then welcome. We wish we could be welcoming you in person!

You may be wondering what you have just seen and why. Below we hope you find some information about the project in your area and about its sister projects around the country.

You may have spotted a shadowy figure hunched over a camera or a computer as you passed the tree. That could well be the lighting designer who created the work. You will find more information about them here too.

The lighting designers and their freelance assistants have not had the chance to do what they do for over a year now. This is the first thing they have lit in a long time because our theatres and concert venues are closed.

We cannot shout about this work because we are still in the dark age with the risks of social gathering. So this is a chance encounter. An illuminated tree has briefly interrupted your life. We hope it has lifted you and piqued your curiosity. It is a gift.

It is also an homage to the tree, a tribute to its sinuous tenacity.  All these trees have endured time and man with their blind intelligence.

Who better to draw these shy giants into focus than a group of artists who live in the shadows themselves?

Listen to The Litten Trees soundtrack that was created especially for this project by Vicky Abbot.

Please let us know what you thought of The Litten Trees here. 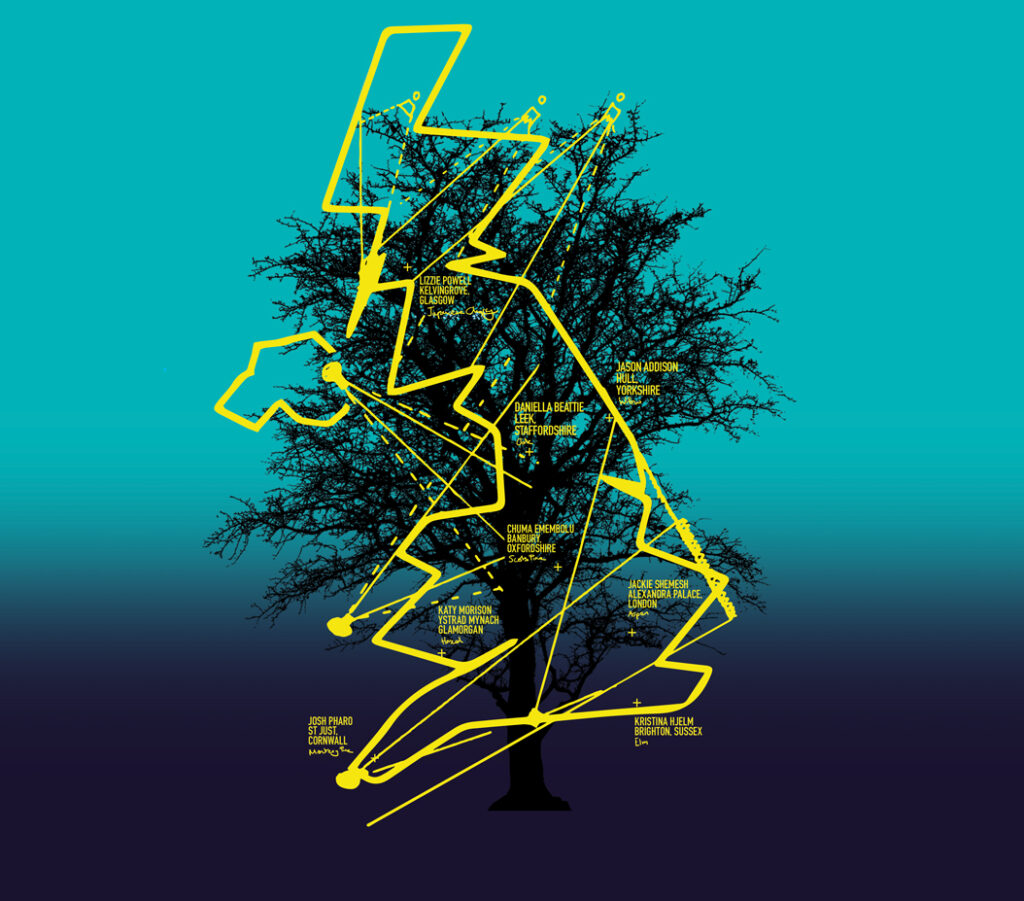 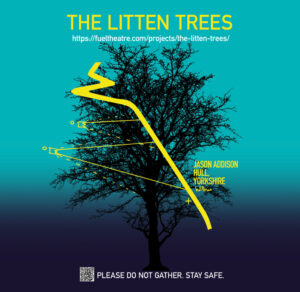 Jason is a graduate of the ALD Lumiére Scheme, an associate artist at the Herd Theatre, and associate designer at Chapterhouse Theatre Company and Rhubarb Theatre. We asked Jason why he chose this tree and he responded, ‘I chose this tree as it really stood out to me as soon as I saw it. I love willow trees and how they fall/hang down. I also wanted to provide a little entertainment and light for the residents of Pickering and Ferens homes as they may have been sheltering this past year and not been able to leave their homes. I hope they can get a bit of joy on their doorsteps.’

Jason has been supported by Graham Roberts (production electrician), and Marcus Heald (assistant). With thanks to HPSS for the hire kit, Claire Champlin, and all the residents at Pickering and Ferens Homes for allowing us to light their tree. 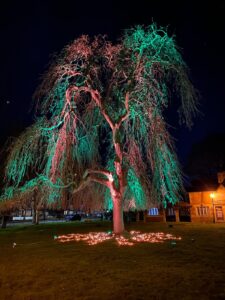 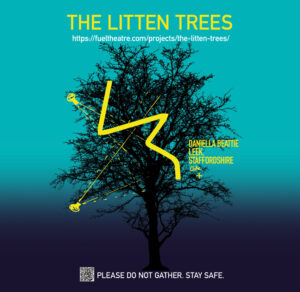 Daniella is an award-winning lighting designer who trained at Bretton Hall, and became the first resident lighting designer for New Vic Theatre Stoke-on-Trent. When asked why she chose to work with a Cherry tree Leek, Staffordshire she said, ‘It has a good shape to allow me to explore our relationship with the canopy and the earth.’ The local button and fabric industries have inspired her design and sees this project as an opportunity to ‘bring light at the end of the tunnel.’

Danielle was supported by Andy Wadell, Richard Dodd, and Chris Thompson, with photography by Tim Vickerstaff. Thanks to Suzy Somerville, Pete Morgan, and the New Vic Theatre. Thanks to Vicki Woollacott and Debbie Potts at Westwood First School in Leek. 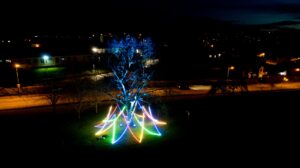 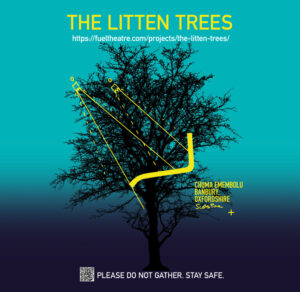 Training with the Royal Shakespeare Company, Chuma has a number of productions under his belt where he has served as part of the lighting design team as well as currently serving as the associate lighting designer at The Bread & Roses Theatre, White Bear Theatre, and Golden Goose Theatre. Chuma also serves as a freelance lighting designer for Mountview Academy of Theatre Arts. The inspiration for Chuma’s design if the cycle of life through the 4 seasons and when asked what this project means to him after the last year, he said ‘It’s the chance to inspire joy, hope, and fun while bringing a crucial aspect of theatre back to the public.’

Technical assistant from Dan Foggo. Thanks to Midnight Lights and Julia O’Shea at the parks department at Cherwell District Council. 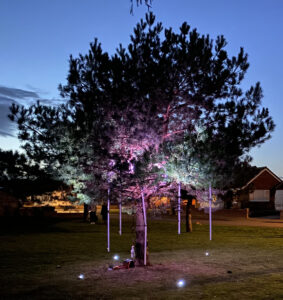 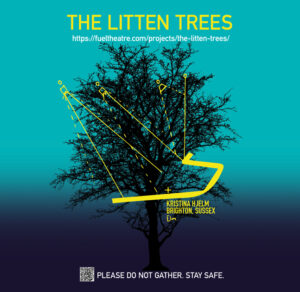 Kristina graduated from Rose Bruford College in 2001 and as well as working intensively as a lighting designer within a great range of performance styles and genres, she runs Flying Eye Performance Company, a cross-art collaboration. Discussing the inspiration for her design, she said ‘Even before I knew that this tree was an Elm, I saw it as a very strong female character with a big embrace. Amazingly, Elm trees are actually considered to be feminine and within Scandinavian mythology, the first person was in fact both from an Elm. Elms are also often associated with the cycle of life, death, and rebirth, themes that have been very prominent in all of our lives during the pandemic. I was interested to see how I could light this tree and tell a story of a journey through motherhood to respond to the qualities I personally get from this tree.’

Technical support and programming by Olly Welsh. Thanks to Max Calesini from Laz in the Park, Jedd Hamilton at Whitelight and Brighton, and Hove City Council, and Nick Mumford. 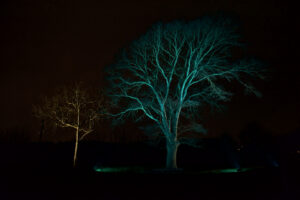 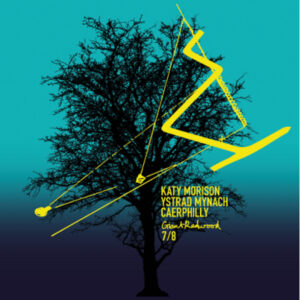 Katy is a lighting designer based in South Wales who works with theatre companies and directors both in Wales and across the UK. She has worked as an associate designer and re-lighter on tour for many productions, and as a lecturer and supervisor at RWCMD. Katy explained her design like this, ‘The structure of the tree and how I can reveal the unseen interior to those passing by. To give a different perspective on something that might normally be overlooked. To reveal its beauty to those who might come for a closer look, to show them what I see.’ 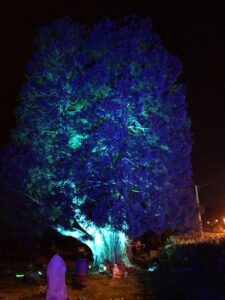 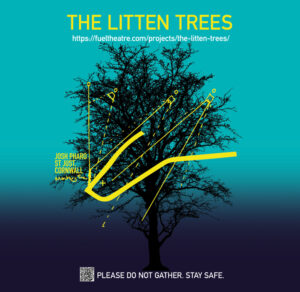 Joshua is a lighting, video, and creative caption designer who has been designing since 2012 and has worked with companies including the Royal Court, National Theatre, Gate Theatre, Belarus Free Theatre, Chichester Festival Theatre, Royal Exchange Manchester, and the Almeida. He said ‘Some gentle space to reflect and be uplifted, a space for optimism. A little intervention in the normality of our lockdown routines. To enter into the coming change with a tiny bit of magic in our mind’ when asked what he hoped his audience would take away from his piece.

Technical assistance from Lucy Gaskill. Music and vocals by Vicky Abbot. With thanks to Barnes Thomas, Wildworks. 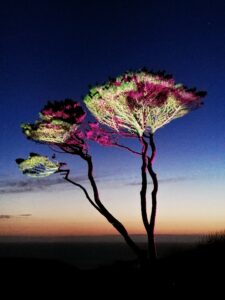 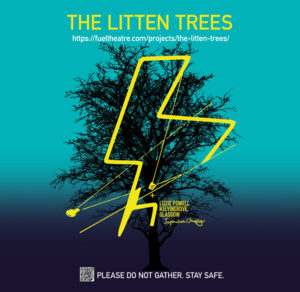 Lizzie who is based in Glasgow and whose previous work includes Anna Karenina at the Royal Exchange, Avalance: A Love Story at the Barbican, Macbeth at the RSC, and Our Town at Regents Open Air Theatre. When asked what this project meant to her in the context of the last year, Lizzie said ‘It has made me look back and take the positive happenings from the last year. The ways in which I have experienced love and friendship. The different forms that these friendships take but still knowing that they are there for me and I for them. This project has enabled me to declare these feelings aloud.’

Lizzie has been supported with technical fabrication by James Gardner, and programming and production assistance by Jon Meggat. With thanks to Brian Scott and the team at Glasgow City Council. Also, thanks to Amit Sherhan – for Q-Lab excellence, Guy Colletta – heart beats, Paul Claydon, and of course Niall Black 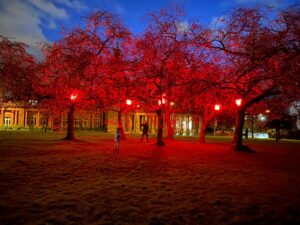 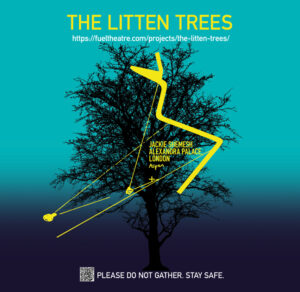 Jackie has worked with organisations including Sadler’s Wells, Manchester International Festival, National Theatre, Young Vic Theatre, Bush Theatre, Almeida Theatre, and several theatres in the West End. After the last year, Jackie believes this project will bring optimism not only for himself but the public who see his design. When asked how he felt being the sole creative working on his project, he said, ‘A bit exposing, also, I found that the supporting production team became my collaborators artistically and technically which is very helpful.’

Jackie has been supported by programming from Daniel Heggarty.With thanks to Ambersphere Solutions Ltd, Chisato Ohno, Briony Berning-Pollard, Stone Nest, and to Alexandra Palace and the parks and events teams in particular for their kind hosting. 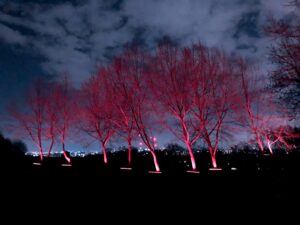 The Litten Trees is presented for free. If you are able, please consider making a donation to support Fuel to produce more work and employ artists and creatives across the UK.

Texts cost £20 plus one standard rate message and you’ll be opting in to hear more about our work and fundraising via telephone and SMS. If you’d like to give £20 but do not wish to receive marketing communications, text 20LITTENTREESNOINFO to 70460.

Alternatively, you can donate via our donation page here, by selecting The Litten Trees.